Glutamate is interchangeable with glutamic acid. The two are nearly identical, the only difference being that glutamic acid has an extra proton (i.e., an extra hydrogen atom). Under physiological conditions, glutamic acid loses a proton, and this form of the amino acid is known as glutamate. The glutamate form is the form that is abundant in the human body.

WHAT DOES GLUTAMATE DO?

Glutamate is also the amino acid precursor for its counterpart, the inhibitory neurotransmitter GABA (gamma-aminobutyric acid), and the body’s most abundant amino acid.1

Glutamate is an important building block for proteins in the body. It is important for nutrition and metabolism. Glutamate, as glutamic acid, is one part of the “master antioxidant” tri-peptide glutathione. Glutamate interaction with specific taste cells in the tongue is a major component of umami taste.2

HOW ARE GLUTAMATE AND GABA RELATED?

Glutamate and GABA levels go hand in hand because GABA is produced from glutamate with the help of vitamin B6. Glutamate’s excitatory effects are balanced by the inhibitory effects of GABA. Where glutamate increases the likelihood of an action potential, GABA decreases it.

HOW IS GLUTAMATE MADE?

Glutamate is synthesized from glutamine via the glutamate-glutamine cycle.4

In the pre-synaptic neuron, glutamine is converted into glutamate by phosphate-activated glutaminase (GA). That glutamate is stored in synaptic vesicles until it is released into the synapse.

Glutamate that has been released into the synaptic cleft will ultimately be taken up by astrocytes, a type of glial cell, which are support cells of the central and peripheral nervous systems.

The astrocytes convert glutamate into glutamine using the enzyme glutamine synthetase (GS) with the help of mineral cofactors magnesium and manganese. Glutamine will eventually make it back to the neuron where it can be converted into glutamate, thus starting the cycle all over again.5 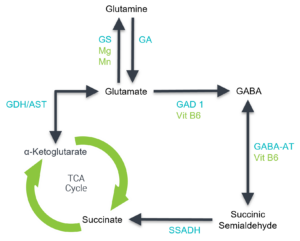 WHERE IS GLUTAMATE FOUND IN THE BODY?

As the central nervous system’s most abundant and critical excitatory neurotransmitter, glutamate is found throughout the brain and spinal cord in neurons and glia, and is present in over 90% of synapses.6

Glutamate is also a non-essential amino acid that is present in all protein-containing foods, but ingested glutamate has no association with glutamate circulating in the brain. Glutamate from high glutamate foods cannot cross the blood-brain barrier,7 and upon ingestion, is quickly metabolized as oxidative fuel for the intestinal lining.26

Note: The blood-brain barrier (BBB) is the specialized system of brain microvascular endothelial cells that shields the brain from toxic substances in the blood, supplies brain tissues with nutrients, and filters harmful compounds from the brain back to the bloodstream.8

WHAT DOES GLUTAMATE DO IN THE BRAIN?

As the main molecule promoting neuronal excitation, glutamate is the principal mediator of cognition, emotions, learning, sensory information, and motor coordination, and is linked to the activity of most other neurotransmitter systems (e.g., dopamine, serotonin, .).9,10

Glutamate is responsible for the majority of excitatory chemical messages that are sent between nerve cells.

Glutamate plays a critical role in long-term potentiation (LTP), the main form of synaptic plasticity, which represents a cellular correlate of learning and memory.11,12 In other words, glutamate allows nerve cells to connect associated information, which is the foundation of memory.9 Our brain does not create new neurons to store new memories, it strengthens connections between existing neurons to store new memories: this is long-term potentiation (LTP).

Energy Source for the Brain

When glucose levels are low, the brain can use glutamate as a reserve energy source.

Mediator of Sleep and Wakefulness

Glutamate levels are high when you’re awake and during the REM (rapid eye movement) phase of sleep.13 One exception is in the thalamus, where levels are highest during non-REM sleep.

Higher levels of glutamate are associated with an increase in pain levels.

Glutamate as a GABA Precursor

Glutamate is the metabolic precursor for GABA. As the main inhibitory neurotransmitter in the central nervous system, GABA is critical for counteracting glutamate’s excitatory effects.

WHAT HAPPENS WHEN GLUTAMATE IS OUT OF BALANCE?

Glutamate levels are very tightly controlled. Too little glutamate, and neural impulses will be slow, resulting in trouble concentrating and a feeling of mental exhaustion.9

Some conditions are also believed to be associated with the brain having low glutamate levels:

HOW DOES GLUTAMATE BECOME IMBALANCED?

Glutamate is an amino acid. If amino acid levels are imbalanced, glutamine, glutamate, and GABA levels could be affected. Although glutamate is non-essential, meaning the body can produce glutamate from other sources, amino acid precursors such as glutamine are needed to make glutamate.

Low levels of cofactors involved in glutamate metabolism (such as magnesium, manganese, and vitamin B6) could lead to imbalanced glutamate levels.

Glutamate and glutamine are used in high quantities by the body. Illness (such as a burn) could deplete tissue levels and lead to imbalances of glutamate.

Injuries to the brain can cause an imbalance between glutamate and GABA function, resulting in excitotoxicity.27

Neuroinflammation has also been shown to imbalance the important glutamate/GABA relationship.28

HOW CAN YOU IDENTIFY GLUTAMATE IMBALANCES?

A simple test kit shipped from NeuroLab® can offer an accurate snapshot of brain chemistry without any need of a needle or even having to leave the home.

How Can You Naturally Support Glutamate ?

Vitamins, Minerals, and Other Nutritional Supplements

Vitamins B3, B6, magnesium, and manganese are involved in the metabolism of glutamate. Imbalanced levels of glutamate, GABA, or glutamine may be a sign that these cofactors are needed. Vitamin B3 (niacin) is used as a coenzyme in the production of glutamate dehydrogenase, the enzyme that catalyzes the reversible inter-conversion of glutamate to α-ketoglutarate and ammonia.*

Amino acids and protein supply the body with glutamate and may be useful in people who have low glutamate. Taurine may help in situations of glutamate excess. Taurine exerts a neuroprotective effect by several mechanisms, including reducing the glutamate-induced increase of intracellular calcium level29 and by modifying glycine’s affinity for glutamate NMDA , a requirement for their activation.*16 Carnitine is also believed to have a protective effect by acting on glutamate’s metabotropic receptors.*17

Phosphatidylserine and docosahexaenoic acid (DHA), neurolipid compounds used in cell membranes, are believed to be involved in the function and balance of glutamate receptor signaling and in cellular protection.*19,20

Celastrus paniculatus, a climbing vine common in India whose seeds are believed to improve cognition, may be able to protect neurons by modulating glutamate receptor activity.*21,22

Huperzine A, long used in traditional Chinese medicine to enhance memory and reduce inflammation, may have a role in balancing glutamate receptor binding, as well as safeguarding cells by decreasing glutamate-induced calcium mobilization.*23

Ginkgo biloba and Rhodiola rosea are neuroadaptogens believed to protect neurons from glutamate.*24,25

What Is Dopamine and What Is It Responsible For?