Dopamine is a neurotransmitter that activates the brain’s reward center during pleasurable activities. Optimal dopamine function is involved in many aspects of health, including memory, movement, motivation, mood, attention, sleep, arousal, learning, and lactation.

What is Dopamine and How Does It Work?

Dopamine is a neurotransmitter (a chemical messenger) that is produced in large concentrations during pleasurable activities such as when eating sugar or junk food, having sex, or participating in fun and enjoyable down-time activities like spending time in nature or engaging in a favorite hobby. Dopamine is released during these times as a reward for engaging in the activities necessary for survival and reproduction such as eating, drinking, and competing.

Dopamine helps people remember pleasurable experiences. Thus, dopamine plays a role in cravings for food, drugs, and nicotine in susceptible individuals. The sharp increase in dopamine that occurs when using some recreational drugs reinforces the brain to remember the experience and all the routines and cues associated with drug use. An example of this is the urge to smoke while driving or after lunch.

Dopamine is one of three catecholamines (including norepinephrine and epinephrine), neurotransmitters that can function as hormones and are involved in the fight-or-flight stress response. Although norepinephrine has garnered the lion’s share of attention in regards to the stress response, dopamine also plays a role in how the body responds to stress and it can influence the hypothalamic-pituitary-adrenal (HPA) axis.1,2 Acute stress generally leads to activation of the dopamine system followed by a subsequent decrease in dopamine that can lead to feelings of unhappiness.1 Researchers find a significant association between everyday stress and cravings for various substances (e.g. cocaine and amphetamine), which activate the dopamine system.1

How is Dopamine Made?

As a monoamine neurotransmitter, dopamine contains one amino group connected to an aromatic ring by a two-carbon chain. Like all monoamines, dopamine is derived from aromatic amino acids, specifically the biochemical conversion of phenylalanine to tyrosine to dopamine in a series of steps (see Figure). Dopamine is then converted to other monoamine neurotransmitters, norepinephrine and then epinephrine. Vitamin B6, iron, niacin, and tetrahydrobiopterin are the nutrient cofactors needed to make dopamine. 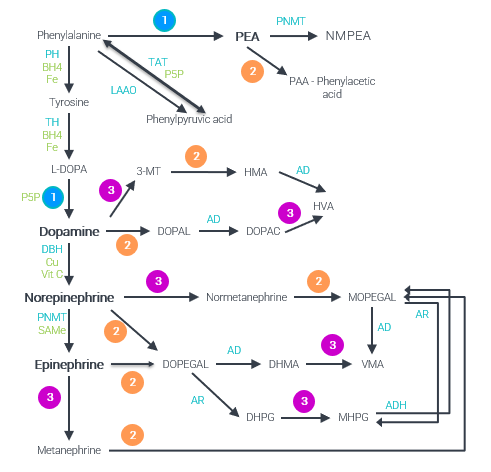 Catecholamine Pathway. Dopamine, norepinephrine, and epinephrine are synthesized in the catecholamine pathway. Phenylalanine is the precursor amino acid for the catecholamines. In a series of biochemical steps, phenylalanine is converted to tyrosine, L-DOPA, dopamine, norepinephrine, and finally epinephrine. Cofactors work with enzymes to synthesize the neurotransmitters and break them down. These include tetrahydrobiopterin (BH4), iron, copper, vitamin C, vitamin B6, magnesium, and s-adenosylmethionine (SAMe).

Where Is Dopamine Found in The Body?

Dopamine is made in the adrenal glands, where it modulates aldosterone and serves as a precursor to norepinephrine.3 It is most famously produced in the CNS in the midbrain, where it is made in the ventral tegmental area and substantia nigra pars compacta.4 Neurons from these areas give origin to three main pathways, the nigrostriatal, the mesolimbocortical, and the tuberoinfundibular. As central dopamine does not cross the blood-brain barrier, peripheral dopamine is minimal but does circulate in the blood stream where it affects blood flow as a vasodilator.19 Dopamine receptors are found in the kidneys, pancreas, lungs, and blood vessels outside of the central nervous system.5 In fact, renal dopamine regulates sodium extraction and electrolyte balance, and renal dopamine production or dopamine receptor function may support healthy blood pressure.5

What does Dopamine do in the Body?

Dopamine is involved in memory, movement, motivation, mood, attention, sleep, arousal, and learning. It plays a role in the stress response. Dopamine is critical to both the ability to learn and motivation.6 This is a complicated biological process as target cells must be able to differentiate whether increased dopamine is a signal to learn or move.6

In addition to its role in cognition, dopamine has a number of important physiological actions elsewhere in the body. These include:3,7

What Happens when Dopamine is Out of Balance?

When dopamine levels are balanced, emotions are more stable. Balanced dopamine leads to a sense of well-being and motivation, alertness, and focus. Conversely, dopamine deficiency can lead to feelings of sadness, lack of concentration, and lack of motivation. Both high and low levels of dopamine can lead to problems in the body.

Low dopamine is linked to:8-11

High dopamine levels are associated with:3,11

How does Dopamine Become Imbalanced?

A number of factors can cause dopamine deficiency or excess. These include: 12-15,16

Furthermore, recreational drug use can alter the brain’s reward system by damaging dopamine receptors. As a person uses more and more of a recreational drug, the brain’s reward center becomes less sensitive to the point that only the drug is strong enough to elicit enough dopamine to generate a pleasurable response. Previously pleasurable experiences don’t release enough dopamine for a reward response any longer. Therefore, users have to take more just to get the same response.

How does Dopamine Interact with Other Hormones?

Dopamine works together with other catecholamines. Optimal dopamine levels are required for the production of norepinephrine, as dopamine is a precursor of this catecholamine. Sex and stress hormones can also interact with dopamine. For example, testosterone, estrogen, and cortisol each impact dopamine neurotransmission in the brains of adolescents and adults and this interaction can therefore affect psychiatric health.17 Low dopamine levels can increase prolactin. Dopamine promotes growth hormone and reduces thyroid stimulating hormone. Insulin resistance, or high insulin levels, can increase dopamine levels.

How to Test Dopamine Levels at Home

How Can We Naturally Support Dopamine?

Nutritional supplements containing vitamins and minerals can help to balance levels of dopamine.* The vitamin or mineral cofactors needed to make and remove dopamine from the nervous system include:

Eating foods that boost dopamine levels is another strategy. These foods include:

Enjoyable and relaxing activities can raise dopamine levels.  These types of activities include: