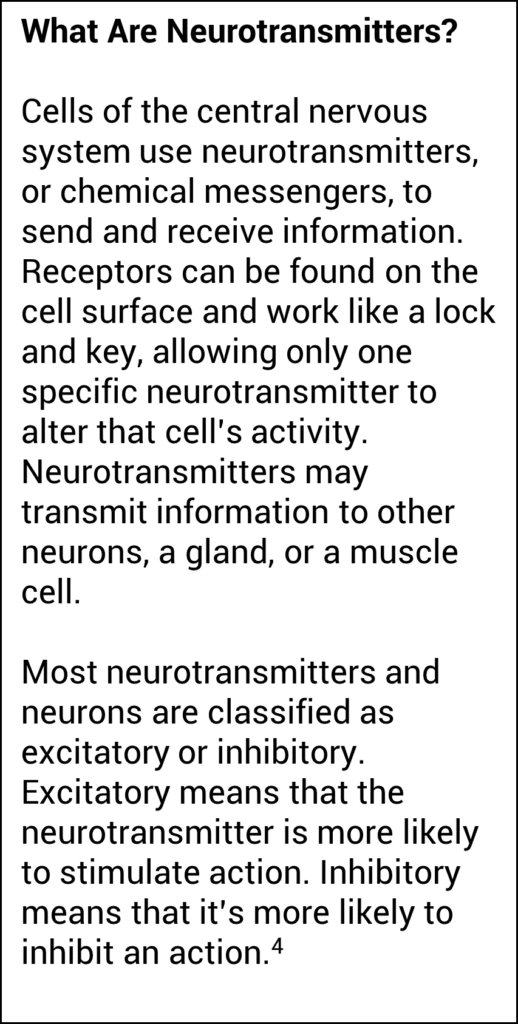 Serotonin is one of our happiness neurotransmitters that makes us feel good. When we are feeling anxious or blue it can be a sign of serotonin imbalance. In addition to mood concerns, serotonin imbalance may also show up as sleep disruptions, gut issues, or cravings and urges; among many other complaints. Because it plays a role in regulating several physiological processes, serotonin testing is helpful to identify serotonin imbalances. Low or high serotonin levels can be corrected with diet and lifestyle.

What Does Serotonin Do?

How Is Serotonin Made in the Body?

Serotonin, like all neurotransmitters, is derived from an amino acid. It is the only neurotransmitter produced from tryptophan and is the end product of the metabolism of tryptophan to 5-hydroxytryptophan (5-HTP). Serotonin is produced in both the central nervous system and the GI tract. Nearly 90% of serotonin originates in the enterochromaffin cells of the small intestine. Platelet serotonin also originates in the small intestine. The remaining serotonin is produced in the brain.1-3 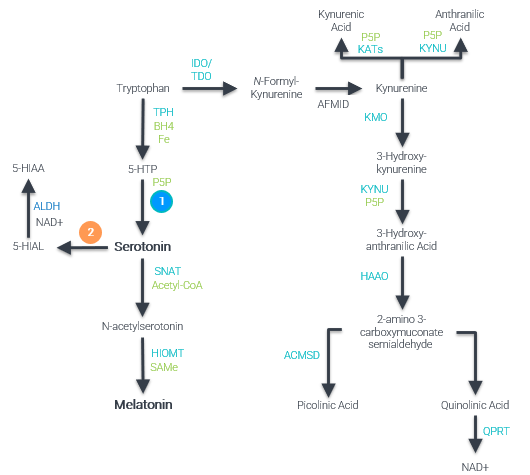 Tryptophan Pathway. Tryptophan is the amino acid precursor for serotonin, melatonin, and niacin. In a series of biochemical steps, tryptophan is converted to 5-hydroxytryptophan (5-HTP) and then to serotonin. Cofactors work with enzymes to synthesize serotonin and break it down. These include tetrahydrobiopterin (BH4), iron, vitamin B6, and niacin.

What Does Serotonin Do?

Serotonin makes you feel good and plays a significant role in mood regulation. As a mood regulator, having sufficient levels of serotonin helps you feel less anxious, happier, calm, and more focused. In addition to mood regulation, serotonin is also involved in the regulation of several other physiological processes including:

What Happens When You Have a Serotonin Imbalance?

Imbalanced serotonin levels are associated with a number of health concerns that impact quality of life. For example:

What Happens When You Have Too Much Serotonin?

Serotonin syndrome, or the condition of having too much serotonin, usually happens when taking one or more medications that increase serotonin levels. Serotonin syndrome can be life-threatening and should be addressed immediately.

Symptoms of Too Much Serotonin:

A rare type of cancer called a carcinoid tumor can produce high levels of serotonin in the body and may cause skin flushing, diarrhea, difficulty breathing, rapid heartbeat, or skin lesions on the face.

How Does Serotonin Interact with Other Hormones and Neurotransmitters?

Serotonin works in concert with other hormones and neurotransmitters. Estrogen, testosterone, dehydroepiandrosterone (DHEA), and thyroid hormone enhance serotonin activity. On the other hand, imbalances of cortisol as well as high insulin inhibit serotonin action. Imbalanced serotonin could also be a red flag for imbalanced melatonin levels. Optimized serotonin levels are known to promote healthy thyroid function and activity of the hypothalamus.

Serotonin works together with dopamine to maintain chemical balance in the CNS. They often produce opposite effects in the body to help maintain balance. For example:

How Does Serotonin Become Imbalanced?

A number of factors can disrupt serotonin levels or associated hormones or neurotransmitters. These factors include:

How Can You Identify Serotonin Imbalances?

With a simple and convenient urine neurotransmitter test from NeuroLab®,  you can pinpoint serotonin imbalances in patients who struggle with a host of brain health symptoms. Patients can test serotonin levels at home. This makes for easy collection and bypasses the need for a trip to the clinic.

How Can We Naturally Support Serotonin?

It is possible to encourage healthy levels of serotonin through lifestyle measures, including: