Procite-D is one of Sanesco’s Targeted Nutritional Therapy™ (TNT) supplements. A product to support excitatory processes in the nervous system, Procite-D works by helping your body make chemical messengers (also called neurotransmitters) such as dopamine, norepinephrine, and epinephrine by providing the necessary raw materials which are building blocks for these neurochemicals.* Low levels of these neurotransmitters have been associated with apathy, lack of focus, poor memory, and decreased stamina. At healthy levels, these neurotransmitters increase energy, focus, and a sense of well-being.

There is a level at which neurotransmitters need to be maintained in order for your body to function optimally. Levels may become imbalanced from physical and/or emotional stressors. If you’re in a rowboat with a hole in the bottom of it, you wouldn’t just keep dumping out incoming water, if you could plug the hole, right?

Procite-D works similarly by supporting the upstream precursors that turn into the catecholamines dopamine, epinephrine, and norepinephrine.* Providing the necessary materials to support the catecholamines may help address deficiencies using the body’s natural pathways, rather than artificially increasing neurotransmitter levels through the use of pharmaceuticals. 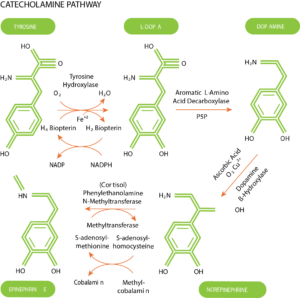 Consequences of Being Out of Balance?

The chemical messenger dopamine plays a role in making us feel good, helping us think clearly, and influences our motivation. Dopamine levels that are out of balance may lead to concerns with energy levels, apathy, cravings, urges, lack of impulse control, and more!

Support for dopamine, epinephrine, and norepinephrine can potentially help improve concerns associated with low levels such as apathy, lack of focus, poor memory, and decreased stamina.* If these sound like concerns you are struggling with, consider asking your doctor about Procite-D.

PEA (or β-phenylethylamine) is a chemical messenger that NeuroLab now tests for! PEA helps modulate dopamine levels, keeping them from going too high or too low. The DL-phenylalanine in Procite-D can also feed into the PEA pathway.* PEA is important for mood and focus. If you suspect that you may have a dopamine or PEA deficiency, talk to your healthcare provider and see if Procite-D could be right for you!

Find a provider in your area who works with Sanesco.
Become a provider if you’re a healthcare provider who is ready to help your patients find HPA balance.

*These statements have not been evaluated by the Food and Drug Administration. This product is not intended to diagnose, treat, cure or prevent any disease.

Jacob is a soon to be graduate of UNC-Asheville with a major in Biology. Before Jacob discovered his love for the life sciences, he spent his first two years at UNC-Asheville as a mechatronics major. Rather than formally pursuing an engineering degree, Jacob went on to take his engineering knowledge and pursue hobbies such as 3D printing and coding. It is Jacob’s dream to be able to blend both branches of science to afford patients the best level of care and inspire them to live the healthiest lives they can.