With age, we begin to worry about our cognitive health. The number of Americans over the age of 65 is projected to more than double in the next forty years, increasing from 40.2 million in 2010 to 88.5 million in 2050.1 Given these statistics, it will become increasingly important to understand the cognitive changes that accompany normal aging. Some cognitive abilities, such as vocabulary, are resilient to brain aging and may even improve with age. Other abilities, such as conceptual reasoning, memory, and processing speed, may decline gradually over time.

It has become popular knowledge that the brain operates on a “use-it-or-lose-it” basis. Common strategies for the maintenance of cognitive health include challenging the brain with new learning, getting aerobic exercise, and staying socially active. But what about supporting our neurotransmitter balance? Can we optimize this important messaging system to also support our cognitive health? We think that the answer is a resounding “Yes!”

Cognitive aging is a consequence of molecular and biochemical aging, which results in metabolic, hormonal, and immune dysregulation, increased oxidative stress and inflammation, altered neurotransmission, and reduced neurotrophic support of neural cells. Such changes impair the plasticity of the brain, that is the ability to reorganize, learn, and remember. Here we look at changes over time in the individual neurotransmitter systems and possible opportunities for intervention toward preserving cognitive health.

Synaptic plasticity is defined as the ability of synapses to strengthen or weaken over time, in response to increases or decreases in their activity. We know that maintaining optimal plasticity is important to support learning and memory. Plasticity is how learning occurs. The aging brain, however, may undergo impaired synaptic plasticity.2 Many forms of plasticity are initiated by the neurotransmitter glutamate.3

Glutamate, the key excitatory neurotransmitter in the central nervous system, is considered essential for brain functioning and has a vital role in learning and memory formation. However, excess glutamate can have negative consequences on synaptic plasticity while low glutamate can interfere with the ability to learn and remember. Keeping a balance in glutamatergic neurotransmission is therefore essential.

Dopamine also has a profound role in cognitive health, particularly dopaminergic neurons in the pre-frontal cortex (PFC) and hippocampal areas.4 Dopamine is known to selectively inhibit or enhance synaptic signaling that promotes action, attention, motivation, and affect.5 However, humans invariably lose brain dopamine during aging.5 Both vascular and structural changes are known to affect dopamine system integrity.6 Such brain changes have been associated with age-related cognitive deficits.7 Restoring dopamine levels could be an important intervention in maintaining cognitive health as we age. 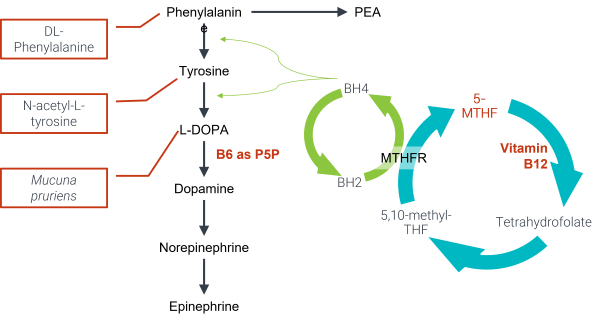 An herb in the tradition of Ayurveda has been studied for its well-known dopaminergic action. The seed of Mucuna pruriens has been shown to contain L-DOPA, the immediate precursor to dopamine in the catecholamine pathway (see figure).*8,9 Not only does the L-DOPA of Mucuna provide a boost to the dopaminergic system of the brain, but it also has been shown to contain neuroprotective compounds.*10 Additionally, Mucuna provides free-radical scavenging ability.*11 Sanesco’s Procite-D™ of our Targeted Nutritional Therapy™ (TNT) formulas contains 120 mg of standardized Mucuna seed, as well as other cofactors and support for the dopaminergic system (items in orange are ingredients in Procite-D).*

The locus coeruleus (LC), located in the pons of the brainstem, is the major source of norepinephrine (NE) in the brain. Innervation by projections of LC neurons reaches practically all parts of the brain and the spinal cord. Excitation of LC neurons leads to an almost simultaneous activation of neural networks across many CNS regions. Hence, NE is considered a primary excitatory neurotransmitter.

NE is known to regulate a wide range of higher cognitive functions, including working memory, learning and attention, memory consolidation and retrieval, 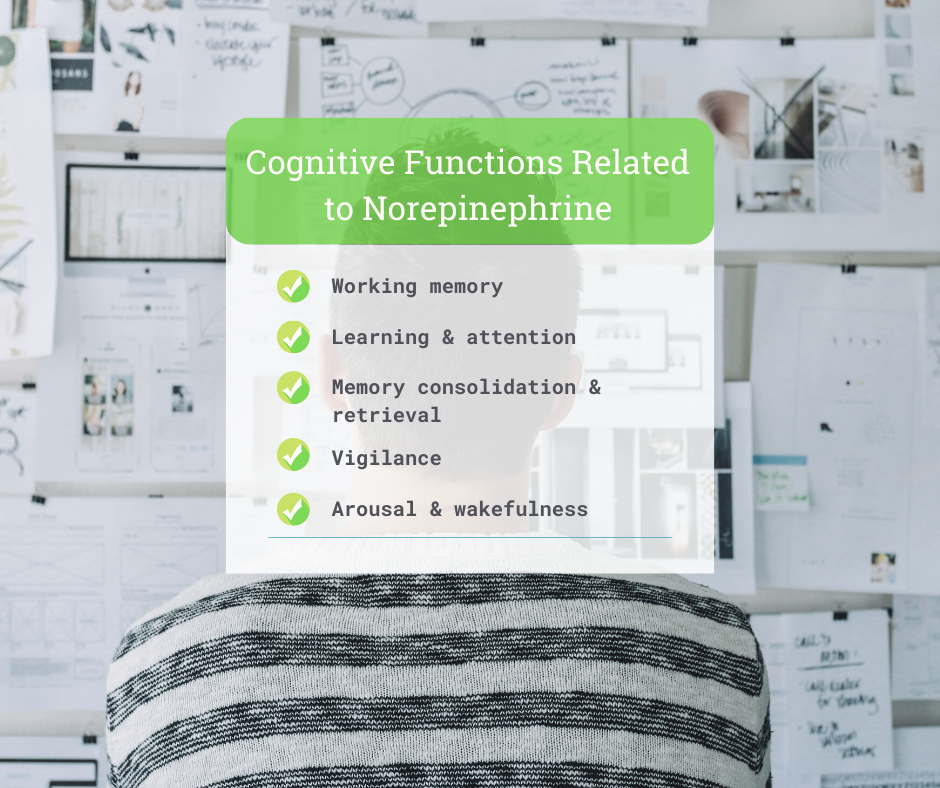 vigilance, and arousal/wakefulness. Conversely, age-related decline within the norepinephrine system has been shown to be associated with reduced cognitive abilities relating to episodic memory and reduced cognitive reserve, in particular.12 In fact, there is reported a direct correlation between the reduction in norepinephrine innervations and cognitive decline associated with aging and neurodegeneration.13 Moreover, the LC is especially vulnerable to toxins and infection which could affect NE levels outside of the aging process.14

Both dopamine and norepinephrine are catecholamine neurotransmitters. Their biosynthetic pathway is dependent upon L-phenylalanine and/or L-tyrosine, P5P (the active form of vitamin B6), vitamin C, copper, and, in the conversion step between NE and epinephrine, a methyl group. The health of the catecholamine pathway, like so many other pathways in the brain, thus depends on optimal nutrient intake and excellent methylation ability.

Given that genetic variations in the ability to methylate are not uncommon—between 10%-15% of the Caucasian population and more than 25% of the Latino population have polymorphisms in both copies of the MTHFR gene15—methylation support may be warranted for improving catecholamine balance. Sanesco’s MethylMax™ offers excellent methylation support for those patients with MTHFR polymorphisms or those whose conversion from NE to epinephrine is not optimal.*

Recent literature shows that serotonin plays an important role in memory processes, as enhancements of brain serotonin have led to memory improvement.16 Older adults show extensive variability in cognitive performance, including episodic memory. A portion of this variability could potentially be explained by genetic factors. For example, a cohort of those carrying the short allele in the serotonin transporter gene show memory deficits relative to those carrying the long allele.16 However, it is not just genetics but also aging that is associated with decreased cognitive health.

Neuroimaging studies have consistently demonstrated degeneration of monoamine systems, especially the serotonin system, even in normal aging. For example, lower cortical serotonin transporters were associated with worse performance on tests of auditory-verbal and visual-spatial memory in those with mild cognitive issues, but not in controls.17 In another study, those with mild cognitive difficulties had up to 38% less of the serotonin transporter detected in their brains compared to the healthy control group.18

Maintaining optimal serotonin levels is important for memory and also for control of the excitatory system, particularly norepinephrine and glutamate, so that the brain can sustain balance, bringing more serenity and grace to our lives.

The primary complaints associated with age-related decline such as poor memory and focus as well as associated complaints such as moodiness, anxiousness, obsessive behaviors, and low mood show statistically significant (p<0.05) decline when the NeuroWellness Program™  is fully implemented.